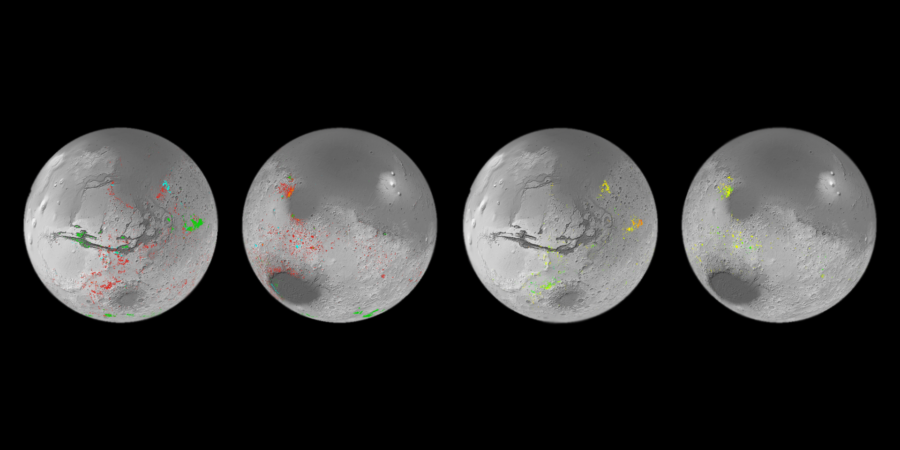 Studies carried out in part by the GSP team at the LAM and the Origins Institute has provided the first global, high-resolution map of the so-called ‘hydrated’ minerals on the surface of Mars. These minerals have the particularity of having been formed by chemical interaction between Martian rock and liquid water, and they often contain water trapped in their structure. They are thus excellent tracers of the ancient aqueous environments of Mars and exobiological targets of prime importance.

This global mapping, which took more than 10 years to build, highlights several hundred thousand sites of aqueous alteration on Mars, compared with about a thousand known previously. Most importantly, it reveals that the oldest surface of Mars (older than 3.7 Ga) is altered by water almost everywhere, changing our view of ancient Mars. Many of the mineralogical sites discovered in this way are being studied in greater depth because of their high scientific potential, particularly in the context of in-situ exploration of Mars. For example, the Oxia Planum landing site for the ESA ExoMars rover was discovered.

On Earth, certain hydrated minerals such as clays (phyllosilicates) or salts (sulphates) are known for their potential to sequester and preserve organic matter, particularly in sedimentary geological contexts. The identification of sites on Mars from orbit with similar composition and geology make them important candidates for the exploration of organic matter on Mars and its exobiological potential.

Ultimately, this mineral map will be used to better constrain the amount of Martian water trapped in its rocks today, in order to answer a key question about the history of Mars: did the planet ‘drink’ most of its water in its rocks? Another long-term objective is to propose landing sites for future human missions where these mineral deposits will allow the use of in-situ resources via the extraction of volatiles (including water) and as construction materials.